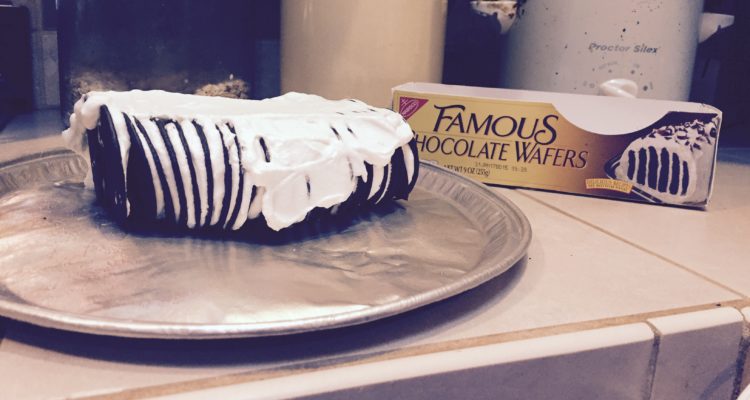 One of my most fond memories of my stepmother is the zebra cake she made for every birthday. They were an annual treat for me growing up, but I’ve never encountered them anywhere else. So when I wanted to make some myself, I had to do some googling and I learned a couple things about zebra cakes. One, most people call them icebox cakes, and two, most people don’t call them anything at all because it turns out, they are not the childhood staple I’d thought they were. Which is weird, because they are really good and super easy to make. You just layer chocolate wafers and whip cream then stick it in the fridge overnight. No baking required. You can get creative with the flavors; I like to use coconut wafers and add lime to the cream for a tropical cake. I’m sure you can find endless varieties on Pinterest. (It seems like a very Pinterest kind of thing.)

While I’ve found lots of icebox cake lore online, I’ve been making them for a few years now and have yet to meet someone in real life who remembers them. So was it just us? I go further down that rabbit hole and it turns out my own family doesn’t even remember them! (My dad “vaguely” remembers.) My oldest siblings never seem to remember anything so my only shot would have been my brother David. Being 13 months apart, our memory was like a joint bank account. Alas, I can’t ask him if he remembers zebra cakes because he died seven years ago. Cancer, why must you ruin everything?

Other things I’d say to David right now if I could:

Dash really likes to play Connect 4 right now, and I will always say “Pretty sneaky, sis” at least once per game, until the end of time.

How weird is it that I eat oatmeal every day now, after we never forgave ourselves for acting like such brats that one time mom made it for us?

I still like to think of Dante as Mr Tay even though it’s been almost 40 years since we cleared up that misunderstanding.

It bums me out that I can say “You were coming off a spare,” and “Yeah, you can’t speak Italian,” and nobody will ever get it.

I didn’t watch Lost so I can’t tell you exactly how it ended, but by all accounts it was a disappointment. Like it was all a dream or in a snowglobe or something. IDK, didn’t watch it.

I was never good at predicting what you would like, especially with comedy, but I’m positive you would have liked Kate McKinnon. And I didn’t get into Stranger Things but I’m still really curious how you’d feel about it.

Thanks for picking Erika.

You would love Dash.

My kids know it’s called pulp but I insist on saying feathers. No matter what we call it, nobody wants it in their orange juice.

I really really miss you. In a way, it’s gotten harder over time because so much has happened and everyone has changed so much and you would have changed too and it’s weird to think how much you’ve missed and to not know what you would be like now. ~20 years ago I read an interview with Lauren Holly and she said that since her brother died she will never be 100% happy again, so, you know, I’ll just add that to the list of things I have in common with Lauren Holly.

Last, I know it’s a long shot, but if you can, say hi to Prince for me.