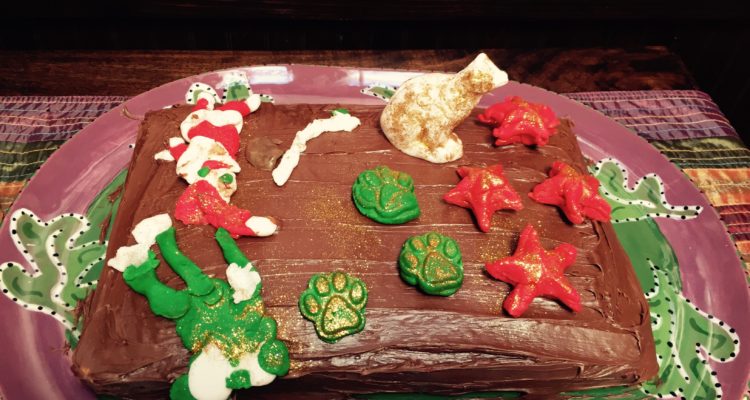 Tuesday morning, five days before Christmas, about five million things on my to-do list. (Or maybe it was 52 million.) I was in total mom martyr mode, my stupid warts were hurting me so much, and I had made three separate trips to the hardware store, searching in vain for the right light bulbs for a hard to reach light fixture in the house. (The guy in the hardware store told me if I got the wrong kind, the light would explode, so that was comforting.) The light thing had really sent me over the edge, but I tried to put the awful morning behind me, and we set off to do some quick errands before dropping Dash off at a 2 o’clock playdate. Our first stop was picking out some fun cake decorating supplies and chocolate molds, because decorating cakes with fondant and making our own chocolates is our new favorite thing, and we were going to restore our holiday spirit if it killed us. We had a great time picking out molds; Lucy picked some cats and paw prints with a Warriors theme in mind, and Dash found some Santas and hockey sticks which I didn’t totally get, but he had a vision. Our fun time here was marred slightly by some bickering over fondant colors at the very end, which was a bummer since this was meant to be our fun errand and I hated to see it devolve into another round of ‘nothing is ever good enough for anyone’ mom martyr mode and I’m trying to restore our Christmas spirit! We’re going to have a good @#$%! Christmas if it kills me! CHRISTMAS!!! CHRISTMAS 2016!

Okay, deep breath in, deep breath out. We leave the store and go back to the car, planning to just return something at Target then bring Dash to his playdate. But this is weird, my car won’t unlock. I had to manually put my key in the car door and turn it, something I don’t think I’ve ever actually done before. Then once my door is open, the sliding doors for the back won’t open on their own, and I have to manually open those too. This is not a good sign, and sure enough when I try to start the car, nothing happens, like literally nothing, it doesn’t turn on, turn over, make a sound, nothing, zilch, nada. I don’t know what the heck happened during the ten minutes we were in the store but my battery is completely dead. I’m trying so hard to keep it together when I call AAA but I was already pretty close to the edge. They send a battery specialist who gets there fairly quickly and I start feeling optimistic; he’ll fix it, we’ll get Dash to his friend’s house, Lucy and I will cut our losses and go home, tomorrow is another day, blah blah blah. But of course it didn’t turn out like that! This is 2016 we’re talking about, you know.

The battery guy gets there and determines two things: the battery is completely dead, and something else is wrong with my car. He doesn’t know what it is, but he does see sparks and smell smoke. He clearly doesn’t believe me that I didn’t leave my lights on while we were in the store, which is doubly infuriating because why would I lie about it, and even if I did, which I didn’t, leaving my lights on for ten minutes wouldn’t have killed the battery and also I didn’t leave my lights on.  Even after he acknowledged that that wouldn’t have killed the battery, it was still clear that he didn’t believe me, even though it was noon on a sunny day and I never had them on in the first place. I’m still bitter about this. He tells me I’m going to have to get towed and he can call a tow truck but they will only let me take one kid with me and then says, “So what do you want to do?” and then I’m crying in front of the AAA guy and it turns out my day has not really turned around after all. You win, 2016.

I sort of pulled it together. The tow truck was going to take two hours to get there so we walked a few blocks to a coffee shop for some snacks. Dash’s friend lives fairly close to where we were and his mom saved the day by coming to pick him up (thank you, Susan!) Lucy and I had each brought a book so we had a nice little coffee/reading date and we were laughing about how far south the day had gone. “Remember when I was upset about light bulbs?” “Remember when I was mad about the fondant?” The tow truck driver was really friendly and we had kind of a fun time riding down to the dealership with him. It took forever to get home after that, and I was not excited to be without a car for the next few days and facing a costly repair. All told, our quick errands took up five and half hours and more crying than I care to admit to. That day was 2016 af.

We watched Elf that night, my car is now fixed, and we had a great Christmas. We had friends over on Christmas Eve and the kids made their Warriors/Christmas/hockey themed cake. It was really fun making that cake, but I think I’m always going to associate those particular molds with one very very challenging day. Don’t let the door hit you on the way out, 2016!